Apple T2 Chip. Everything You Need to Know

Apple’s T2 Chip is a newly built chip that unifies many controllers on Macs into a single chip. These Macs contain the iMac Pro and 2018 (and later, in some cases) variants of the Mac mini, MacBook Air, and MacBook Pro.

The Apple T2 security chip is a system on a chip (SoC) that is responsible for delivering security and controller functions to Apple’s Intel-based Mac systems.

The T2 chip contains its RAM and is its computer, operating in parallel to and answering queries from the main system with which the user interacts. The T2 chip, in conjunction with a new tool known as the Startup Security Utility on Mac, offers capabilities that make these Macs extra protected or secured.

In this article, you will learn everything you need to know about the apple T2 chip. Let’s get started.

What Is the Apple T2 Chip

Apple’s 2nd generation bespoke security silicon chip, the T2, is utilized in Mac products. All it does is make your Mac’s data much safer.

The Apple T2 chip, as a coprocessor, provides the basis for storage encryption, secure boot, and Touch ID. T2’s primary application processor is an Apple A10 version, which is a 64-bit ARMv8.1-A CPU. It, like the A10, is made by TSMC on its 16 nm technology.

Furthermore, it assumes and combines part of the CPU’s duties to improve Mac performance, such as:

The Apple T2 chip’s principal function is to guarantee that the whole boot mechanism is cryptographically confirmed as authorized and accepted by Apple.

When booted, it will first verify the legality of an operating system (OS). Furthermore, it will make sure that all items engaged in Mac’s starting process, such as the macOS kernel, kernel extensions, and firmware, are verified by Apple.

The T2 chip will also block all 3rd-party software recognized throughout the boot process, preventing an attacker from injecting malicious script at boot to control your Mac. You can boot into macOS after the whole booting procedure has passed Apple’s security check.

The Touch ID fingerprint sensor on the Mac Touch Bar could be used to log in to your Mac system. There is no need to input a password since the T2 chip will recognize your fingerprint.

Whenever you reboot or switch on the device, you must input the password. If you’ve not opened your Mac for more than 48 hours, the T2 chip will not accept the fingerprint, and a password will be required.

The T2 chip has both a crypto engine and an SSD controller, allowing for fast encryption and decryption of data on the SSD. It is difficult to decode data encrypted with the T2 chip without the right password.

If your MacBook is lost or damaged, you can rest certain that your data is safe and secure since no one can access the data unless you enter the correct password.

The primary downside is that you cannot restore lost data and files if you forget the password. The T2 chip can also handle a failed password for numerous tries. After one hour between each try, the last three tries can be performed.

After a certain number of tries, you will be unable to make any more passcode attempts, and any further request to decrypt data will be ignored by the chip. As a result, your data may be lost permanently; thus, you should always backup your data.

The T2 chip is mostly concerned with security, although it also provides additional functions and features over Macs without this. This is due to the T2’s inclusion of an image signal processor as well as an audio control system.

In the case of video, this includes better tone mapping, face-tracking auto-exposure, exposure control, and automated white balance. To put it another way, your FaceTime videos will appear a lot better.

The audio controller also improves microphone performance for voice recording and video chats, as well as the sound output for Macs with built-in speakers. All versions equipped with T2 chips have this function, which deactivates the mic whenever the lid is shut.

Here is how you can verify if your Mac has a T2 security chip: 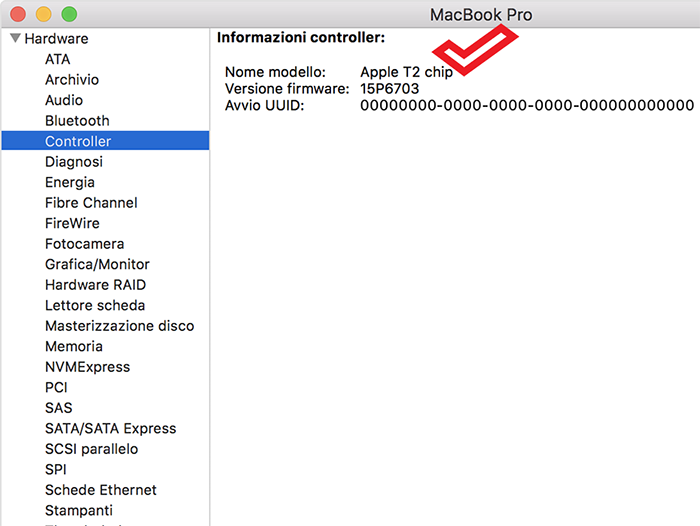 The T2 chip runs the System Management Controller, which controls thermal and power control, recharging, video mode switching, sleep, and so on, as well as the external LED indications on a Mac.

The chip enables always-on Hey Siri capability on select T2-equipped handsets. This allows you to simply summon the assistant without having to push any buttons.

Apple has shown how the T2 may have a big beneficial impact on performance. Users who utilize video apps might see their productivity speed up by 30 times with new HEVC video transcoding.

In October 2019, experts speculated that the T2 was impacted by the checkm8 flaw because it was based on the A10 design used in the first iMac Pro in 2016. Rick Mark then modified libimobiledevice to operate with the Apple T2, resulting in an open-source method for recovering the T2 outside of the Apple Configurator and allowing additional development on the T2.

On March 6, 2020, a team of engineers known as the T2 Development Team exploited the T2’s existing checkm8 issue and released the hash of a secure ROM dump as proof of access. The checkra1n team incorporated the changes needed to facilitate jailbreaking the T2 fast.

In October 2020, a physical defect in the chip’s security features was discovered that could be exploited in an unpatched manner, employing a method comparable to jailbreaking the iPhone with an A10 chip because the T2 chip is modeled on the A10 chip.