When shopping for a new digital camera, a common thing you seek is the picture quality even when you zoom in. There are two main ways to zoom into the object of your photograph: digital and optical zoom.

When taking a photograph with a camera, optical zoom is employed to capture a close-up look at the target without practically getting closer.

On the other hand, digital zoom is a feature of camcorders and digital cameras that allows you to crop the entire picture and then digitally enhance the size of the viewfinder of the region you want to zoom in on.

Considering and differentiating these two technologies is so critical. In this post, you will learn everything you need to know about digital vs optical zoom. Let’s get started!

What Is Optical Zoom?

The zoom qualities of cameras are referred to as optical zoom. All digital cameras provide optical zoom, which may be changed by physically rotating the lens. When you change the lens, you are modifying the focal distance of your camera’s sensor, which affects how much of a picture is caught in focus.

Optical lenses, on the other hand, often employ a fixed element, such as a glass or plastic lens filter, and cannot be altered during a picture shoot. Some cameras offer an electrical zoom option that allows you to modify your image after each exposure. However, they are often more expensive than their optical equivalents.

How Does Optical Zoom Work?

The focal length of a camera is changed by physically shifting the lenses. To enlarge the subject matter in question, optical zoom lenses physically stretch. A motor moves the lens in response to the user’s commands. When a particular button is rotated, or a switch is pressed, the subject is either enlarged or shrunk in size.

In a higher-rated optical zoom camera, the user can take a shot of the object from a long range and still receive a crisp, close-up picture. The optical zoom principle is much like the zoom on a non-digital camera. Each optical zoom lens has a range and a changeable focal length.

What Is Digital Zoom?

Many digital cameras and camcorders include a digital camera. Digital zoom can be used to increase the scale of a scene. It can crop the whole image. The image may be cropped to a central region using digital zoom. The digital zoom ratio is nearly identical to the original.

Digital zoom has the property of interpolating the output back up towards the pixel dimension of the original scene, and because the approach requires cropping, the resolution and picture quality is low and lower. After cropping the image, digital zoom enlarges it to its original size. The image quality generated is not exclusively determined by the camera’s megapixel count.

How Does Digital Zoom Work

Digital zoom is a technique for reducing or narrowing an image’s apparent angle of view. It is performed by cropping the image to a central region with the same aspect ratio as the original and then expanding the result back up to the original’s pixel size. This is accomplished electrically, with no adjustments to the camera’s optics.

Enlarging the image affects the original pixel pattern obtained by the camera’s image sensor. As a result, the visual quality suffers. Photographers utilize digital zoom to designate an area of a shot by using built-in software in the camera. 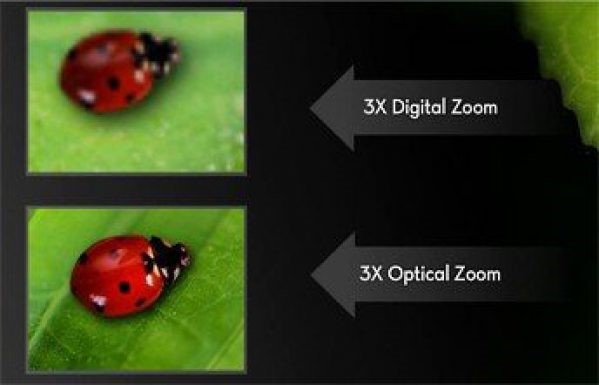 Optical zooming permits the lens to adjust the prisms therein, which affects how light is transmitted—and hence the picture you’re attempting to capture—when it reaches the camera’s sensors. This enlarges the image before taking a snapshot, allowing you to capture excellent quality from a distance.

Digital zoom does not use optics to get your sensors closer to the image; instead, it just zooms in on the image to expand whatever the topic is. This effectively crops the shot before it is taken, lowering the resolution. If you have a 1080p phone camera, digital zooming can drop the resolution to 480p (or lower) for the end output, with no option to adjust it once the shot is taken.

If you want more than a 2x optical zoom lens, you’ll need to plan ahead of time for dragging it about. You will need a camera equipment case, and bags may be pricey. It takes a little time to learn and change the focus on an optical camera lens. Therefore, there is a learning curve.

Digital zooming requires no expertise or understanding of how lenses function. You can zoom in on an image using your camera app, and it’s quite simple to do. If you have your smartphone camera set to auto mode, it will attempt to focus as far as necessary. When in manual mode, you may adjust the focus based on ISO settings.

When you use an optical lens to zoom in, you are not distorting the image; rather, you are improving your focus (This can improve image quality by increasing sharpness, contrast, and white light neutrality).

The clarity suffers as a result of the resolution change. Zooming into an image (digitally) exposes all of the white light and degrades the definition.

Resolution is related to picture quality, but it also affects the sharpness and how light enters the image. With optical lenses, light is refracted off of the inner optics, which maintains the image crisp.

Because digital zooming does not affect the physical camera, you’re stuck with it if you’re at an awkward angle or the light is annoying. You can only change the image quality by going closer to it or adjusting your viewpoint.

Both optical and digital zoom has multiple benefits and limitations, as you may be aware of by now. Generally, optical zooms do not require electronics, and they are often lighter and smaller than digital zooms. Because they employ electronics to enlarge the image, digital zooms can be slightly bigger.

But what about the cost? Digital zoom cameras are often less expensive than optical zoom cameras. However, this varies depending on your finances and how much you intend to invest in a new camera.

The most crucial thing is to select a camera that meets your requirements. The easiest method to do so is to test out several models in shops and buy one that will increase the quality of your work but isn’t heavy on your pocket as well.