How Powerful CPU Cooler Do You Really Need?

The cooler that comes with your PC is referred to simply as the stock CPU cooler. It works for most people as their PC usage may not have a heavy load.

If you are using your PC for gaming, animation, design, or even a major coding project, you might need a better CPU cooler. These tend to have a large heatsink which can make your CPU quieter. It can also increase the efficiency of your CPU.

If you just bought a new PC and you are not planning to place it under heavy load, then you may not need a dedicated CPU cooler at all. Stock Coolers can typically last for a few years, but if you’re looking to squeeze every last bit of performance, you will need a better cooler.

Or, it may be the case your old machine can’t handle your everyday load as well anymore. In that case, upgrading isn’t on the table for you currently, investing in a good CPU cooler could be just the upgrade you’re looking for to help your PC cope better without breaking the bank.

So, from deafening blowiematrons and silent coolers to hunks of metal almost as heavy as your computer case that you can slap to your motherboard, here are some things to look at to help make the best choice for you.

Step 1 – Heat generated by your CPU

Figuring out how much heat is generated by your processor can allow you to quickly determine the size and type of cooler you will need. If you still have the packaging your CPU came in, you may be able to confirm the Thermal Design Power of the processor from either the user manual or any attached pamphlet. However, if this is not the case, you have two options; Use your CPU model or Use CPU-Z. CPU manufacturers usually call this value the TDP of the processor.

A quick Google search of your CPU model will lead you to the manufacturer’s website with the listed information in no time. You’ll see a rounded figure for the amount of heat your CPU outputs on its default settings listed here like this:

Now to determine the size you need, let’s consider the Core i7-11700K. Since its TDP is around 125W, a large cooler will be required.

For CPUs that have TDPs ranging between 50W and 70W, medium-sized coolers will give you the best performance for your money.

For CPUs that have TDPs less than 50W, smaller coolers will be the most reasonable choice, and you may even want to stick to the Stock Cooler.

Here are some suggestions for good low profile coolers. Your stock cooler will generally be designed to handle most of your CPU heat, but if you see your CPU temps constantly staying above 70 degrees while you’re working on your computer or you notice the fan ramping up and your computer slowing down, it means your cooling system cannot handle all the heat your processor throws at it.

Using the TDP as a reference figure to opt for an appropriate system cooler can ensure that your new cooling system is matched to the CPU heat output. It enables your system to perform better and avoid thermal throttling, prolonging the life of silicon in your machine.

Step 2 – Check if you may be overclocking

There are two quick ways to check this;

Firstly, you can enter BIOS settings. Check for the base clock, multiplier, and CPU VCORE properties. If these do not match the defaults, you are overclocking.

If you do not want to restart your computer or mess with the BIOS, you can use CPU-Z. It will give you a value for core speed in MHz, so move the decimal three places to the right to read it in GHz, the unit generally used.

Now to see the actual speed, you need your computer to get into action. The easiest way is to run Prime 95. It will calculate values for trillions of primes in the time it took you to read this paragraph. It will let you know the actual speed of your PC. 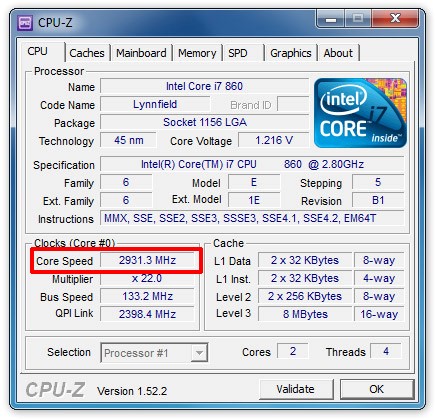 If you are overlocking, you may want to avoid your stock cooler, as getting a liquid cooler or something with similar heat dissipation characteristics would suit you better than an air cooler.

Stock coolers are not something you should overclock on. Manufacturers design stock coolers to just about match your default TDP. Overclocking your processor is going to make it pull more power from the wall, increasing your thermal output by a lot as well.

Opting for a beefier cooler is almost necessary when going for even light overclocking. If you fail to provide sufficient cooling, your computer can perform worse and even be unstable, crashing if pushed even slightly since your cooler can not keep up with your processor.

If you’re planning to go for moderate to intense overclocking, opting for a water cooler becomes a necessity. Even the sizeable air coolers on the market will fail to run at an amount to dissipate heat effectively.

Liquid coolers typically rely on the water running in a loop to take the heat away from your processor and throw it out using a radiator mounted somewhere on your case. Water cooling can be a little harder to pull off than traditional air cooling, but these AIO options come preassembled and can make the task a lot easier if you decide to go that route.

When shopping for computer fans, you will come across 3-pin and 4-pin options.

4-pin fan options allow for much finer control over your fan RPM, the speed at which it spins, based on how hot your computer is running. It translates into your computer being quieter when you’re pushing it as hard and the fans only ramping up to full speed when they need to.

While there are companies that offer fans branded as being silent, the fan always has some noise to it, and depending on the ambient sound level in your work environment, you may notice even the most silent of CPU fans. If you work in a loud environment, CPU fan noise might not be an upsetting factor.

There is another advantage 4-pin fans have as well since they’re not pushed to their limit 4-pin CPU fans usually have longer lives. This choice is also partially decided by your motherboard though, not all boards support 4-pin headers, so before you make the distinction, double-checking if your board supports 4-pin headers is a must.

3-pin fans are usually cheaper, and every motherboard will support 3-pin fans so if you’re on a tight budget and want a quick and easy option without going overboard or are looking to replace your CPU fan after the older one died, the 3-pin fans are a cheaper and safer bet.

Having a shiny new fan isn’t all you need.

A good rule of thumb is to not cheap out too intensely on the thermal compound. Options like the Arctic Silver 5 or offerings from Thermaltake or a well-known name can’t go wrong but make sure it’s not cheap enough to raise some eyebrows, which usually means it’s no good.

If your computer worked fine before with just the stock cooler and you’re seeing it running hotter now, you might not need a new cooler. Give your fan and computer case a good dusting off and check the thermal paste. If it looks cracked or dried out, a fresh new tube of this stuff might be the only thing you need to get your computer working like it used to again.

There is no hard and set rule for picking something like a CPU cooler. A stock cooler might be enough for one use case on a given processor and might be inadequate for someone else using the same processor if they decide to use it for a substantial workload or overclock it. It depends on what you need.

In general, the way to making a good choice is to know how much heat your CPU outputs. Overshooting the target just slightly can never hurt and can ensure your computer fares better even on warmer days or when you push it a little more than usual.

Being aware of the novelties other than just picking any CPU cooler off the shelf, like making sure you have a good thermal paste, is necessary to squeeze every last drop of performance out of your investment.

As long as you keep your computer case from getting clogged up with dust, ensure your thermal paste is fresh, and don’t push your processor beyond the limits it was designed to go, even the stock cooler should fare well against the test of time.

Investing in a beefier cooler might make it easier on your current processor, and the effort is not wasted with more efficient processors. TDPs have remained relatively similar the past couple of generations, so a good cooler you buy today might be good enough for your next computer as well.

It is a good investment if you make sure you have good research and your use case makes it necessary. No matter what fan you go for, making sure it isn’t clogged by dust and refreshing the thermal compound every couple of months can keep your computer cool and keep it going a lot longer.